Katana Training for Fun and Fitness

The way an edged weapon works is always determined by function and form. In function you look at the primary use of the weapon: Is it meant to thrust first or slash? Is it heavy-bladed and used to crash through things or is it razor-thin and meant to cut with precision?

In form you look at its shape and edge. Is it curved or is it straight? Is it a long weapon meant to be used to outfight or a short one that needs your opponent to be within grappling distance? Does it have one edge which requires deft handling when changing directions or two? Is it designed to be used with one hand or does it require both?

The combination of all this determines style, technique, power, speed and efficiency when faced by one or more opponents. The katana, in keeping with most swords is just over a kilogram in weight (just over a bag of sugar) which doesn’t sound like it’s very much and yet it is sufficient to generate the force necessary to slice through most things.

Throw a one-kilogram weight with your entire body and suddenly not only do you have to take into account the way muscles work when they are unbalanced but also how your mind works when your body is augmented in this way.

A katana is a weapon with a history that dates back almost a thousand years and there is a deep tradition that inevitably has grown around its use. Whether you are a practitioner of the purer, formal kata techniques found in Kenjutsu or the more modern style of Kendo or belong to any of the literary hundreds of modern styles of Japanese swordsmanship that came into popularity in the 20th century there are two things which are the same: A. The use of the katana, in its basics, differs very little from what the ancient Samurai would have practiced and B. The weapon, without the body is useless.

You are the katana

That’s what makes training with a katana fun and also makes you work on your fitness. You simply can’t wave the katana around without using your muscles. And because your muscles power the weapon, how ‘good’ or ‘bad’ a strike is. How effective a technique depends entirely on how you use your body.

A downward cut from top to bottom, for instance, is powered by the muscles of the shoulders and the speed at which your arms move and the Earth’s gravity (of course) but it can also be augmented by your bodyweight if you bend your knees and drive it through so that it truly becomes unstoppable.

The same logic applies to any strike in any direction. Its effectiveness is governed by:

What else you need to know

There are four more things you need to know to make your swordplay sizzle.

A. Grips – a katana traditionally is a double-handed weapon. A lot of the sword’s power comes from the push-pull action between two hands on the sword’s hilt. The two-handed grip drives the primary motion of the weapon that is then followed through by the arms, shoulders and the rest of the body. There are four grips in Kenjutsu that allow you to hold the katana in a different way and use it faster to get to the target you want it way easier. They also allow you to strike in a different direction without having to lose a lot of time or even appreciably change the positioning of your body.

B. Footwork – Like everything else in martial arts the primary power cell of the armed war machine you become when you hold a katana, is your own body. The positioning of your legs adds power or lends speed to the execution of the technique you are performing. There are two primary stances: walking stance and L-stance (both pictured below) and each can be shallow or deep depending on style. The more shallow ones provide the greatest amount of mobility. The deeper ones allow you to bring in more power to each cut by firmly grounding your body and bringing in your weight to bear behind each move. 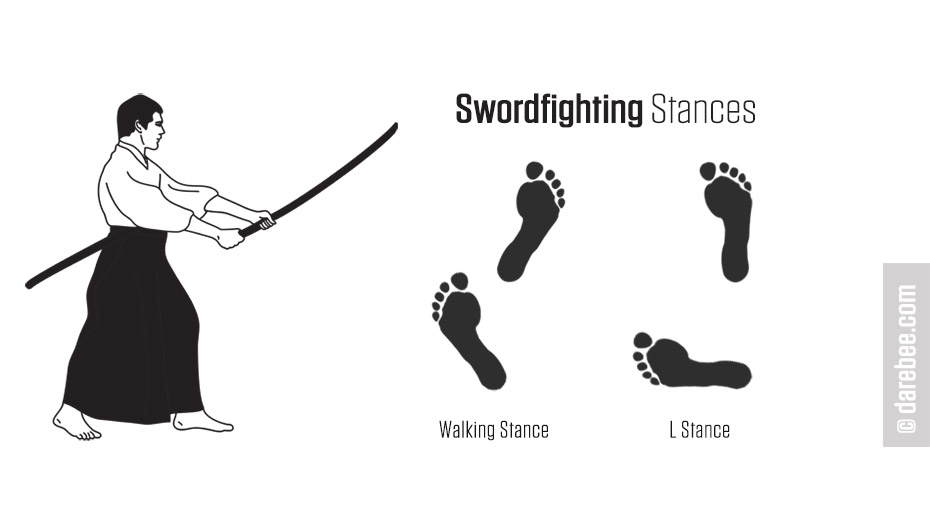 C. Wrists – A katana is powered, partially by your wrist movements. Swordsmen always have strong, supple wrists and a strong grip. This allows them to change the way they hold the sword on the fly, so they can launch unexpected attacks from angles that are hard to defend against. Because the katana is a single-edged weapon, the grips you use and your ability to change them quickly makes a huge difference on the attacks you can bring to bear.

D. Improvisation  - The key thing to using a weapon like the katana is to experiment. If it was a real weapon and you were locked in a life-and-death combat all that would really matter would be your ability to get rid of your opponent and stay alive. To those who say that style and form are really important it is worth keeping in mind that Miyamoto Musashi, arguably Japan’s greatest samurai and the author of a timeless book on strategy called The Book of Five Rings, used the katana single-handed (going against all tradition), argued that you could fight with a katana in each hand and about halfway in his career gave up using katanas all together and started using bokken to defeat his opponents, using them (again, single-handed and two at a time). He founded the style of swordfighting known as niten'ichi that’s loosely translated as “two swords as one”.

Get Fit – Have fun

Despite the manuscripts that have survived through the ages and the many schools of armed martial arts the exact way that katanas were used in battle is still an open question. This is what makes practicing with weapons so much fun. First, by understanding what powers the katana you get to use your body as a weapon. This promotes an awareness of muscle coordination, and a keen understanding of body positioning. Katana training is the ultimate exercise in functional fitness.

Second, training with a katana is a journey of exploration. The moment you pick up your bokken you become a Samurai. Your opponents are arrayed before you. Your task is to use your body as efficiently as possible to tirelessly make your weapon work.

In that mental game you find ways to do what you want that are dictated by what your muscles will let you do and what the weapon you use can do. Few exercises have as strong a mental component as playing around with a katana, plus, when you do it long enough and fast enough you begin to feel the benefits in the strength of your arms, the suppleness of your wrists and the power of your shoulders.

No other fitness exercise will give you quite so many complex things as fast with as much fun. 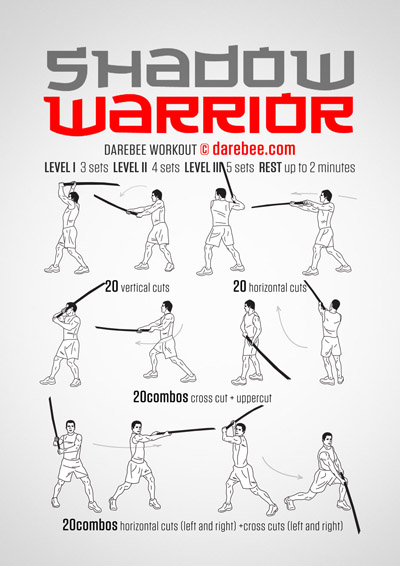 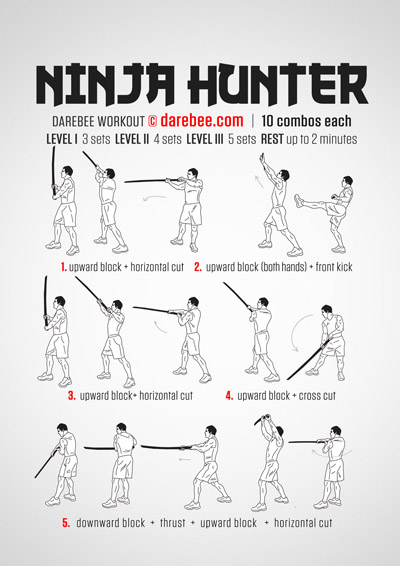 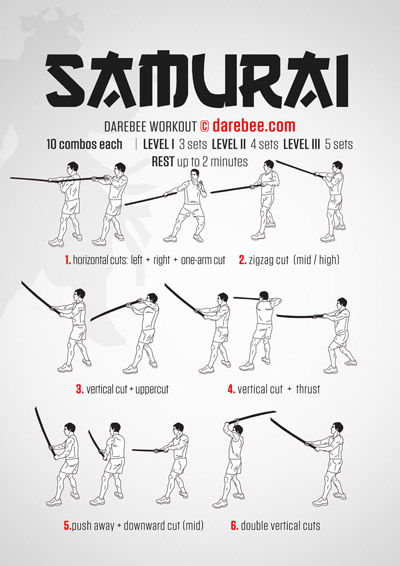 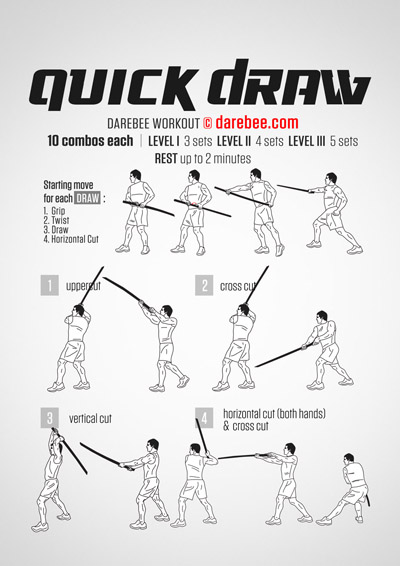 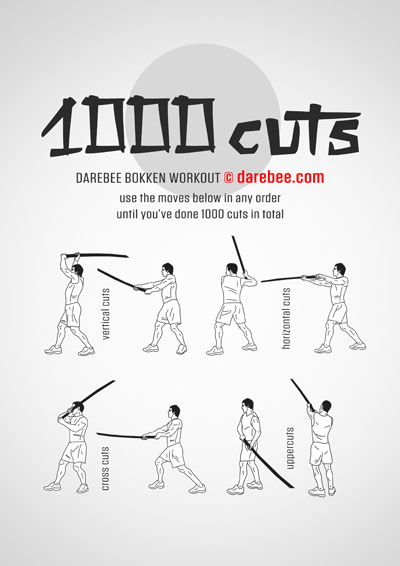 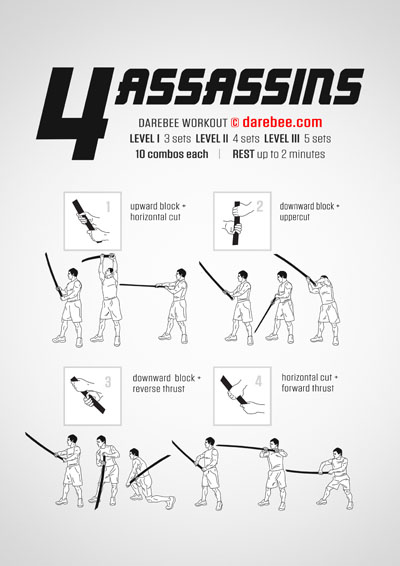 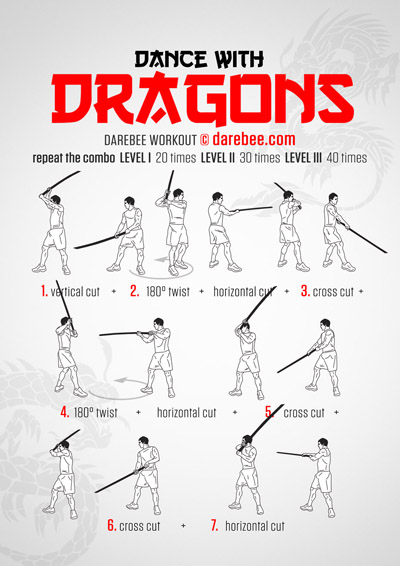 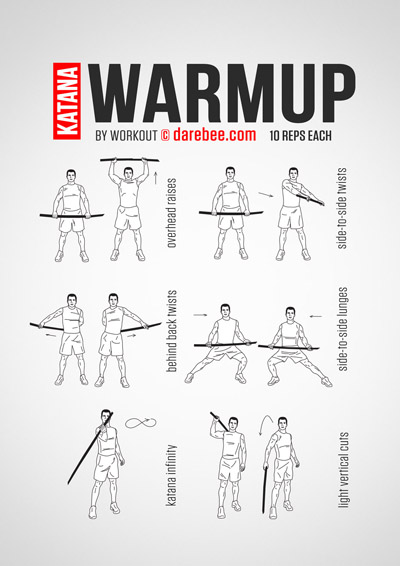