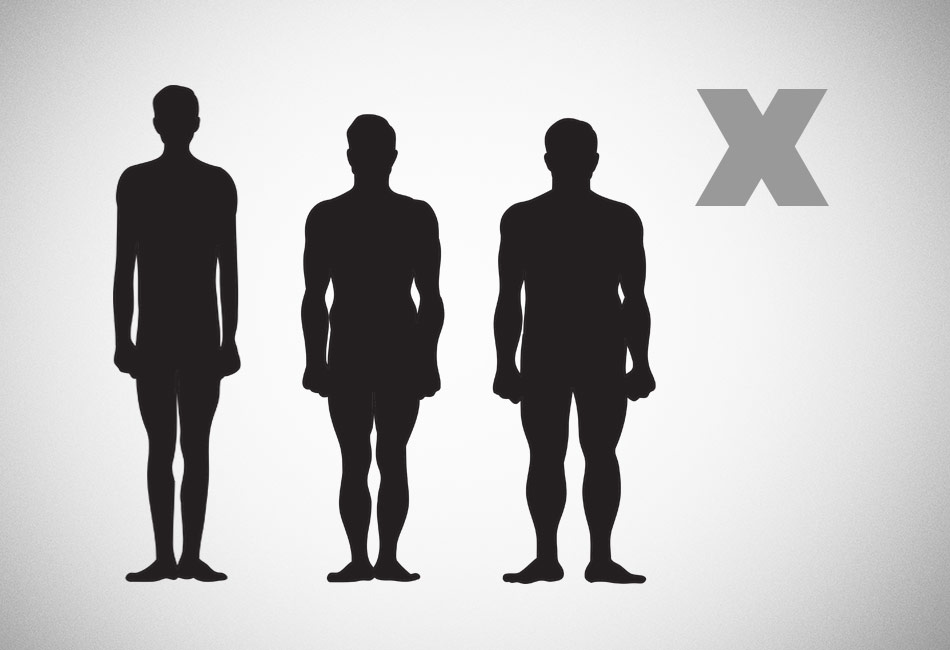 The Myth of Body Types

There are still many forums, websites and even fitness instructors who use the convenience of the endo, meso, ecto classification for body types, perpetuating a myth that has no foundation in science. Our bodies are the instruments we use to connect to the world and the places we all live in so it’s worth taking a little time to unpack this a little and understand where the myth ends and the science begins.

The theory behind somatotypes (the scientific term for body types) came in the 1940s from the American psychologist William Herbert Sheldon, who used visual examination to classify the human physique according to the relative contribution of three fundamental elements named after the three germ layers of embryonic development: the endoderm, (develops into the digestive tract), the mesoderm, (becomes muscle, heart and blood vessels), and the ectoderm (forms the skin and nervous system).

In the 1940s there was a strong social movement in the US that leaned towards Eugenics and Sheldon's Endo-Meso-Ecto classification fed directly and very conveniently into that. Despite the physical aspect of Sheldon’s theory his real aim was to tie his observations into psychological observations about the psychological makeup of people and associate that with each body type creating the theory of Constitutional Psychology.

Sheldon used subjective classification techniques based upon his visual appraisal of his subjects’ physiques. His theory of Constitutional Psychology has since been discredited. Unfortunately the fallacy of the physical classifications persists to this day but it's a very poor way of looking at how the human body works or how it can put on muscle. In the early days of the Darebee project we tried using the classifications as a guide to the level of difficulty of our workouts and they were so restrictive and out of touch (as we found out once we started to test them with volunteer groups) that we abandoned them. The reason the fallacy persists to this day is because his original research assistant Barbara Heath, and later Lindsay Carter developed it further and popularized it in the 60s creating a convenient way for many fitness professionals to work with.

Anthropometric Measurements and Your Body

Science and our knowledge of how the body works has developed incredibly since the 60s and it’s time we started to retire the endo-meso-ecto classification for the myth it is. First of all there is no single person who is adequately described by one of these classifications which means that at best they are an approximation and at worst flat-out wrong and you don’t want to base your training nutrition on something that is ‘almost right’.

Second, each person’s body is the result of a mix of characteristics that are traditionally ascribed to one of the Heath-Carter ‘body types’. So, in reality the visual elements that make a person fit into one or the other are actually wrong and likely to lead to more problems than solutions.

The only area where somatotypes come into play in sports science and biology is when we need to take anthropometric factors into account to determine physical fitness and physical performance. Anthropometric factors include body breadth and length, body weight, bone density and even the ratio of the bones of the legs and arms in relation to the torso. There are a number of factors influencing anthropometric measurements: genetics, nutrition, environmental and cultural factors and, obviously, the sex of the person. A study carried out by researchers at the University of Madrid showed that anthropometric measurements can determine physical performance in a subject which then can conveniently be classified into one of the commonly used somatotypes.

There are four key things to remember:

1. Every person is a combination of all three somatotypes based upon the complexities of their anthropometric make up. Someone can be tall, heavy and still relatively lightly muscled for their size. Someone else could be short, light and yet heavily muscled (throwing up an out of kilter BMI Index). You cannot base any training or nutrition plan just on the visual aspect of how you look or how heavy you are (case in point Bruce Lee who built himself up with a proper training and nutrition program).

2. Physical performance has nothing to do with somatotypes and everything to do with physical strength, endurance, coordination and the ability of the body to successfully coordinate muscle groups during ballistic exertion involving concentric and eccentric muscle movements (case in point: Sammo Hung).

3. Physical fitness is independent of somatotype. It refers to the ability of muscles to do specific work within a certain context and recover in a sufficiently short space of time to do it all over again (consider that both a heavyweight boxer and a marathon runner are very fit but visually look very different).

4. The popular link between body type and metabolism is false. While there are differences in the Base Metabolic Rate (MBR) which measures the amount of calories a body burns at rest for each body type, they are the result of muscles and musculature and the individual level of activity that each person engages in, rather than the body type itself.

So What Determines How You Put on Muscle?

The question then remains, if body type is not really indicative of how easily or quickly we can put on muscle, what is?

At this point nutrition comes in. Bones require calcium and calcium has to be present in the diet. A combination of enough calcium and sufficient high-impact exercise to frequently generate 4G forces (about four times the weight of your own body applied to your muscles and bones) begins to affect the density of the bones. As bones get denser they can support greater exertion from the muscles more easily, so muscles can now begin to grow faster.

The recipe for building muscles then is what it has always been and it’s the same for everyone:

People with bones that are already dense because of their lifestyle, will find it easier to put on muscle at any rate. Women, whose bones are generally not as dense as men’s will have to work a lot harder to see results.

How much each person burns at their base metabolic rate (BMR) will depend on their weight, muscle-to-fat ratio, physical and mental activity levels (the brain requires 20% of the blood’s total blood supply), their height, the type of foods we generally eat (i.e. fast-release carbohydrates like sugars or slow-release carbohydrates like unprocessed rice and brown pasta, etc).

Eugenics in the United States

Exercise's Effects on Bones and Muscles

Why High-Impact Exercise Is Good for Your Bones

Exercise and bone mass in adults

The Best Exercises for Healthy Bones