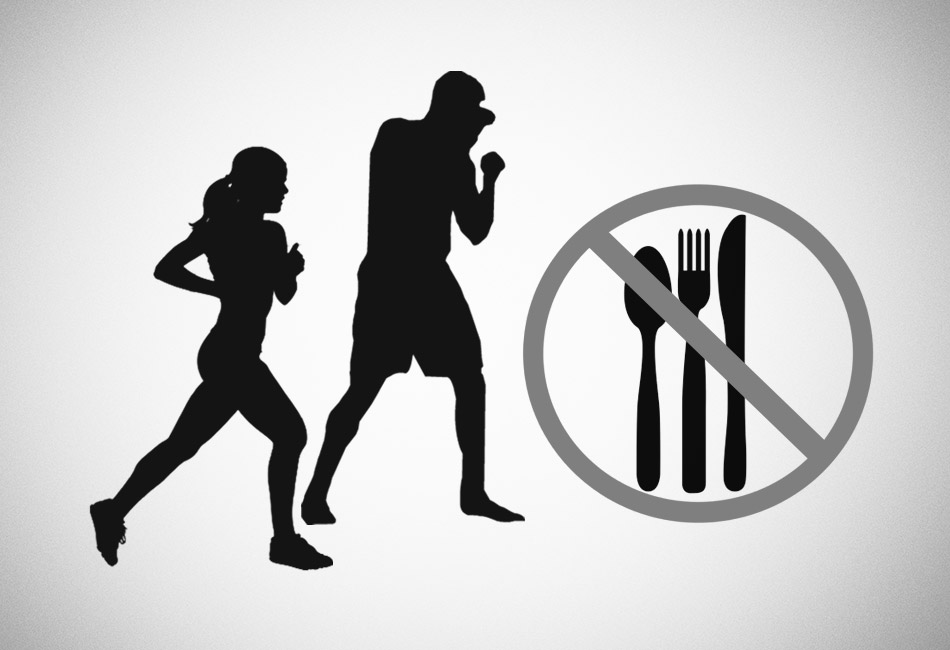 The debate of whether or not it’s good to train on an empty stomach also represents the divide between what science can tell us about fitness and what tradition accepts as being ‘true’.

To answer the question of whether it’s possible to train on an empty stomach we need to understand that every time our muscles are asked to exercise a number of complex, overlapping systems kick in. These systems intertwine which only adds to the confusion. To simplify and untangle them and get to a definitive answer we will look at this from the perspective of three simple elements that are involved in the process of muscle activation, every time:

Every time that our muscles work these three  elements combine to power several different chemical processes the efficiency of which is determined by a person’s cardiovascular and aerobic fitness, diet, body fat composition and the quality of the muscles they carry.

Without oxygen of course, nothing happens, yet sufficient oxygen for things to happen is not always readily available within the body which is why there is an anaerobic response.

Ask your body to run away from a zombie horde, lift heavy weights or jump over a collapsing bridge and your muscles kick into high gear and respond. This instant response is made possible because there is glycogen stored in the muscles that can be broken down through a process called glycolysis to produce pyruvate which is then converted into Adenosine Triphosphate (ATP), carbon dioxide and water. ATP is what powers the muscles.

Unless you have been hyperventilating beforehand, at that point there is insufficient oxygen in the bloodstream to power the process so the Cori cycle, also known as the lactic acid cycle, kicks in and the body works anaerobically (i.e without the need for oxygen). Lactic acid is produced during this process and it enables the muscles to continue to work past the stage where their ATP supply is exhausted. The muscle fibers that are activated to do all this are Type IIB, they are extremely fast in action, can produce great force but can operate only in short bursts before they get fatigued.

These are muscles that are great at helping you get away from the brain-eating zombies and taking action that helps you survive in an emergency but they cannot continue to power your workout past the first few minutes.

As you continue to work out your body’s temperature goes up due to the thermic effect of muscle activity. You take deeper, ragged breaths, your lungs expand and more oxygen from each breath is delivered into the bloodstream which the heart then pumps to the muscle groups in the body that need it most.

The moment oxygen arrives on the scene the Krebs cycle, also known as the citric acid cycle, kicks in. The Krebs cycle takes carbohydrates, fats and proteins and converts them into glycogen which can then be broken down into pyruvate through glycolysis to produce the now familiar ATP, water and carbon dioxide. One of the byproducts of this cycle is lactate which is then used by the body to transport glucose out of the liver, where it is stored, and into the muscles.

The muscle fibers that make this possible are Type I. These are slow twitch fibers that have a slow response rate, do not produce tremendous force but are highly resistant to fatigue. If you were busy running away from the zombie horde, by the time these muscles kicked in you’d have put some distance between it and you, rounded the corner and slowed down a little, gulping in air as you’re out of breath and your muscles are now burning aerobically.

The presence of oxygen in the bloodstream means that the body is now beginning to use fuel stored in the liver (glycogen) which is essentially carbohydrates. Should you continue to run a little longer and that fuel source runs out the body would then go to the stored fat reserves and use them as its next available fuel source.

Suppose that having escaped the clutches of the zombie horde you decide that your best bet is to just get out of town so you just keep on running. At that point your breathing changes. The rate at which you ingest oxygen becomes less rugged and your breathing gets more even. Your breaths continue to be deep but now are measured. Runners and martial artists call this “second wind”. At this point the body continues to ingest large quantities of oxygen but the muscles are working mostly anaerobically.

The muscle fibers employed now are Type IIA. These are moderately resistant to fatigue, can work anaerobically for a long time and can produce a high level of force which is why you can suddenly speed up again when you’re running, after having slowed down to catch your breath a little. At this stage both the Cori and the Krebs cycle are in effect.

The body is looking for larger sources of fuel and these are the fat deposits that are converted into glycogen that can be turned into ATP, lactate, lactic acid, water and carbon dioxide. If your running away from the zombie horde entails running a marathon and your fat deposits are not enough then your body will look to protein to convert into glycogen to fuel its run.

This is a case of last resort. Protein (i.e. muscle) is not a great fuel source for the body as it takes between 20% and 30% of its energy value just to break it down plus by doing so the body cannibalizes its own muscle which makes its long term survival less likely. The body is only likely to look to protein as a source of fuel if the starvation response kicks in. Seeing how this also slows down the metabolic rate which makes vigorous exercise virtually impossible, it is unlikely that you will experience it in the gym or running away from a zombie horde.

Can You Train on Empty Or Not?

This is the question we set out to answer and seeing the processes that go into powering the muscles the answer is a definitive yes. Studies show that you can run for 2 hours at marathon pace before your body runs out of glycogen  and a 2010 study published in the Journal of Science and Medicine in Sport showed that cyclists who completed exercise early in the morning without eating breakfast (fasted state) improved muscle glycogen stores by as much as 50% over the group that ate breakfast before their exercise.

There is additional research that shows that training on empty sensitizes the body to the insulin response allowing it to utilize glycogen in the bloodstream better. Plus, for athletes, there is the added benefit that on an empty stomach there is no diversion of the blood supply to anything but the muscles that need it.

So, why all the confusion? Well, there is a little more.

A study, published September 2008 in the Journal of Physiology and Pharmacology found that those who trained on an empty stomach and then went to bed, without eating, exhibited slowed muscle repair and growth, even though they consumed enough calories after they woke up. This is because human growth hormone (HGH) an anabolic, which is elevated during sleep is adversely affected by catabolic hormones like cortisol, glucagon and adrenaline that flood the system when training on empty. The same study also showed that people who are new to exercise, as a whole, should not exercise on an empty stomach because they experience lightheadedness, dizziness and even nausea as a result of low blood sugar which is usually the result of inefficiency in fat and glycogen breakdown in their bodies.

Showing just how important timing is, the most recent study from Northumbria University, in the UK, showed that you can lose as much as 20% more body fat by exercising in the morning before breakfast.

The 'Bulk and Cut' Question

What about the large body of empirical evidence that shows bodybuilders lose some muscle during their 'bulk and cut' phase? Well, let's look at some of the studies on this front. A 1996 study on bulk and cut without exercise found that the diet itself caused hormonal changes to take place in the body which helped in creating more muscle even as they also added to the fat content of the body. There is a complex process of hormonal changes that take place as a result of diet that directly impact upon the muscles' ability to work thermogenically. In other words during the cut phase of their training bodybuilders do not train at the same level of intensity. The body, being an adaptive machine optimizes itself so that it does not have to carry muscle it does not need, plus it now has the added impetus of fewer calories coming in. For bodybuilding which is all about building muscle for show a bulk and cut phase is a delicate balancing act between dropping body fat (which does happen) and losing some muscle, which also occurs.

So, absolute beginners who are looking to jump-start their fitness by training on empty, shouldn’t. Body builders who need to build muscle, also shouldn't train on empty. Trained athletes who train on empty and then go to bed without having eaten are not gaining much in their performance. For everyone else, training on empty in the morning, before breakfast or a little later in the day, and then having something to eat, is fine and it is likely to deliver faster results in reducing body fat and increasing muscle mass.