What muscles do and how to train them

The confusion that arises is the result of traditional training methods that never looked too deeply into sports physiology and the fact that most times we think we know what muscles actually do. If you’re training for a specific reason however knowledge is power and power comes from being able to target the right muscle groups for the right effect. 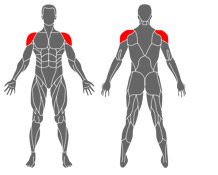 Delts (Shoulders): Allows rotation of the arms.
If you throw the modern boxer’s overhand corkscrew punch or the martial artist’s hip punch you are using your deltoids (also called rotator cuff because it allows the arm to rotate around its anchor point at the shoulder socket). Delts are used for actions such as playing tennis or badminton, where a fast change of direction is called for. Elbow strikes and Bruce Lee’s famous backfist are also heavily dependent on deltoids to generate speed and power. Train them by doing push-ups, dumbbell shoulder raises, jacks and arm raises. 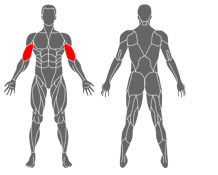 Biceps: Bending of the elbow.

That’s all that biceps actually do. You need strong biceps to lift anything or to arm wrestle someone. Pull-ups and chin-ups help build your biceps. Grappling, climbing, arm wrestling all require bicep power. The underhand stroke of a tennis racquet that leads to a forehand requires bicep power. Upper cuts and body hooks rely on the biceps to power them part of the way. Train them using bicep curls, chin ups, negative chin ups and body hooks on a heavy bag. 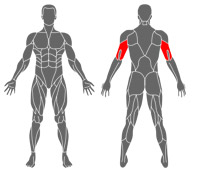 Triceps: Extending of the elbow.
This relatively ‘simple’ action of the triceps is responsible for push-ups, punches, pushes and every saving action our arms engage in when we fall. The thing to remember here is that if you want your punches to be stronger you need to work on your triceps more than your biceps. Triceps govern limb-speed for your arms. Train them with push ups, dips, diamond push ups and one-arm push-ups. 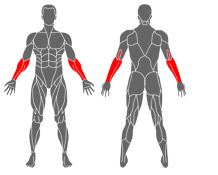 Forearms: Movement of the wrist and fingers.
Without strong forearm muscles we have a weak grip. Fingers are all tendons and they are powered by the forearms. A strong grip helps in pull-ups and chin-ups. It allows us to hold onto heavy objects we are carrying longer. Strong forearm muscles also power sports like tennis, climbing and rowing. Train them by doing chin ups and pull ups and push ups on your fingertips. 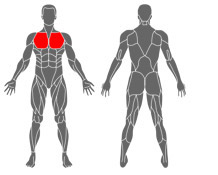 Pecs (Chest): Adduction of the arms.
Every time you clap your hands it is made possible by your pecs. Wrestlers need great pecs to grab people in bear hugs as do boxers who need to grab onto an opponent. You need pecs to help with activities that have to do with grappling and pulling (anything that requires you to bring your arms together, fast). Train them by doing bench presses, deep push ups and wide-grip push ups. 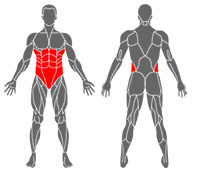 Abs and Obliques: Stabilize the core.
They are used in the smooth transfer of power between the lower and upper body. You need them mostly in sports that require jumping, running and sprinting. They are necessary for explosive moves so boxers and martial artists need strong abs and obliques. Because they stabilize the core they are needed by dancers and gymnasts. Train them by doing crunches, plank, leg lifts, flutter kicks and twisting sit ups. 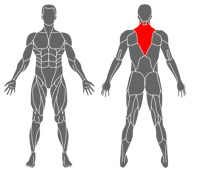 Traps: Lifting and movement of the shoulder blades.
Anyone who brought in the shopping from the supermarket, carrying a bag or two of groceries in each hand used the trapezium muscles to do it. Traps are used every time we lift a load balancing the weight along the length of the spine. In strongman trials they use trapezium muscles every time they lift a weight in each arm in the farmer’s walk event. Train them by doing arm rotations, wide arm push-ups, and shoulder raises with dumbbells. 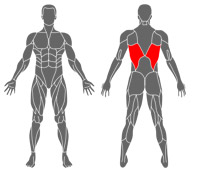 Lats: Adduction and extension of the shoulders.
You need strong lats if you throw punches. Boxers and martial artists go to extreme lengths to develop their lats because it increases the penetrative power of their punches. Lats are also used in rowing and bowling, gymnastics and wrestling. Train them by doing pull-ups, wide arm push-ups and punching. 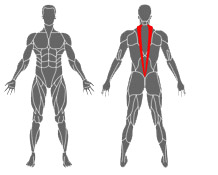 Spinal Erectors: Extension of the back. Core stability.
As the name suggests spinal erectors is the name given to the three muscle groups extending from the base of the back of the neck to the very end of the spine. They help keep the body upright, the spine protected and the back strong. We use spinal erectors every time we attempt a deadlift or when we throw a javelin (or anything in an overhead throw). They are also used in body-rotation exercises such as martial arts kicks (side-kick in particular) and hook kicks. Train them by doing the Justice Served Workout. 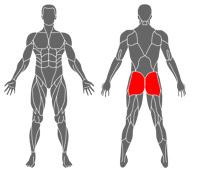 Glutes: Bending or straightening of the hip joints.
Every time we squat or lunge or do bunny hops we use our glutes. Strong glute muscles absorb the vibrations that are sent up by the impact of our legs on the ground, when we run, and tire us less, so they help build endurance. Glutes are used to launch the body in Parkour activities, gymnastics, the long jump and high jump. They are used in sprinting as the body unfolds from a starting position. Glutes come into their own in ballet jumps and martial arts power kicks. Train them by doing squats, lunges and jumping lunges. 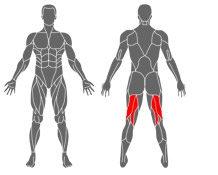 Hamstrings: Bending of the knee.
If you have strong legs and weak hamstrings you are only able to take one fast, strong step, but not another as the leg, cannot be ‘recocked’ quickly. Footballers, runners, jumpers, kickers (well, anyone who uses their legs, really) require strong hamstrings in order to utilize their legs, correctly. Train them by stretching and by doing turning kicks. 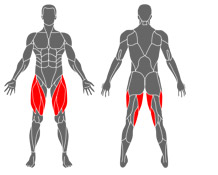 Quads: Extending of the knee.
That is ‘all’ the quads do. Arguably the body’s single most powerful muscle group, the quads are responsible for generating the power in sprinting after the first explosive start has been made. They are used in running, jumping and kicking and they are the body’s powerhouse transportation unit. Strong quads help absorb landing impact vibrations so they do not just help us jump further and land harder but also aid our endurance. Train them by doing squats, jumping squats, wall sits, lunges and jumping lunges. 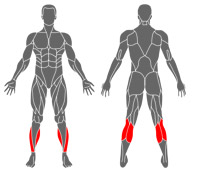 Calves: Raising of the heels.
Your heel needs to come off the ground in order for you to take a single step. Sprinters, runners and anyone who jumps needs strong calves. They also help stabilize the knee joint. Strong calves are needed for lower body control. Many a knee joint pain can be made to go away when calves are strengthened. Train them by skipping rope, calf raises, hops on the spot, jumping jacks and jump knee tucks.

Now that you know all this it’s time to start thinking about how you train and what you need to focus on in order to push your performance to an entirely new level.