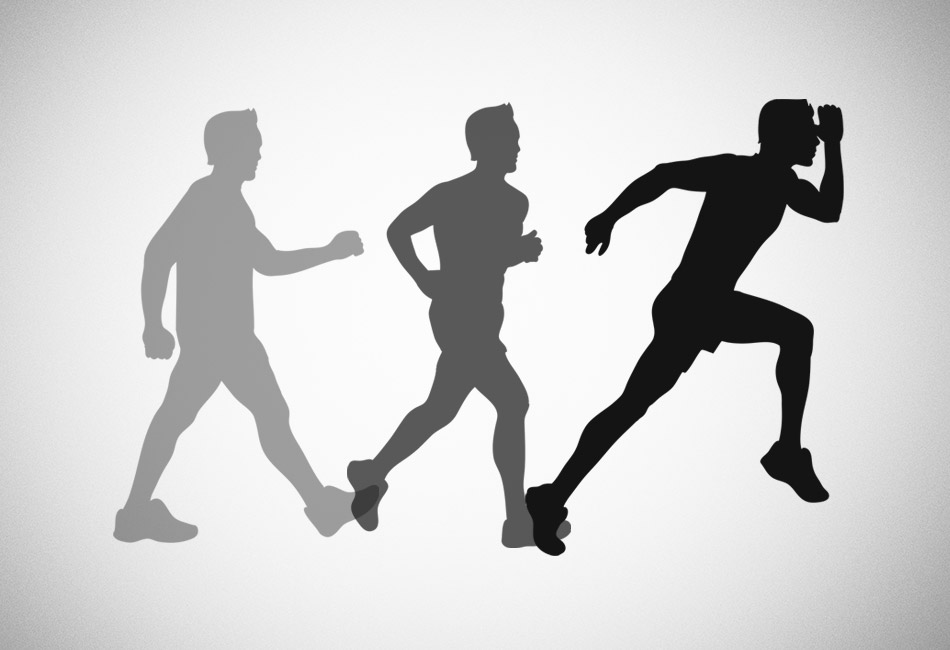 The Difference Between Walking, Jogging and Running

The easiest way to measure the energy cost is by measuring the work we do when we breathe. We use about five Calories per liter of Oxygen we breathe in and the more our muscles work the greater is the Oxygen demand they make and the more we need to breathe deeply and rapidly. This equalizes the differences in fitness levels where an Olympic athlete will find that his jogging speed is more like everyone else’s running speed because he has better aerobic conditioning and higher levels of endurance. What will qualify as jogging for him will depend on the load on his muscles and the Oxygen demand on his lungs.

This is why the commonly used suggestion that jogging is the speed at which you can hold a conversation is actually a valid one. It means that the Oxygen load placed on the lungs is not that heavy so the activity qualifies as jogging and not running.

Walking, for example is a low energy-cost activity but as we walk faster and faster the energy expenditure keeps on increasing. We breathe heavier, until we reach the point where the energy we burn exceeds a particular threshold and the body’s optimization response kicks in and we change gears. A walker who is clocking a speed of 8km/h has higher Oxygen requirements than a runner at that speed. So, indeed, the moment that threshold is reached we change from walking to jogging. The amount of energy we require drops dramatically, once again.

This leap from walking to jogging to running is made automatically by the body in order to optimize the way it moves and the way it uses up available energy. This is important for those who use walking or jogging as a means of maintaining their bodyweight. A fast power walk (especially one where ankle or wrist weights are used) is likely to burn up more Calories than a jog. A slow run may not necessarily burn up more Calories than a jog at the top range of jogging.

How Much Energy Do We Use When we Run?

Because of the body’s adaptive physiology which changes its biological make up after intense exercise there is one more benefit that running has over say jogging or walking and that is the after-burn. The after-burn is an elevated state of Calories being burnt that’s above the Base Calorie Burn we normally have at rest and which persists for some time after intense aerobic exercise.

This is one reason why High Intensity Interval Training (HIIT) workouts are so effective and also why running at a challenging pace produces better results, faster than walking. After walking the body returns to the normal Base Calorie Burn almost immediately while hard running produces a state of elevated energy consumption that can persist for up to half an hour afterwards.

As a rule-of-thumb, running will burn about double the amount of Calories walking does and that's without taking the after-burn into consideration. Jogging is somewhere in-between and can sometimes deliver fewer Calorie burnt than a demanding walk performed with ankle and wrist weights.

If we are using walking as your primary means of cardiovascular training at the moment we will need to walk twice as much as we would have run in order to approach the energy burn. So we need to factor in two kilometers of walking for each kilometer we would have run to you get approximately the same energy cost.

Finally we must remember the body's adaptive response to exercise. It constantly optimizes in order to reduce the energy cost. That means that if we walk the same distance every day for three months while we get better at it, it will also get easier. We will no longer burn as many Calories and we will need to increase the pace or start jogging. The same goes for jogging. At some point we need to start running. And when we run we need to find ways to challenge ourselves either by improving our speed or by increasing the distance we run or by mixing the pace or by doing the running equivalent of High Intensity Interval Training (HIIT) where we constantly break up the pace by going flat out and then kicking it back for a little while and then repeating.

While walking, jogging and running require energy to transport the body over a given distance, running has higher energy costs and also produces the fastest physiological changes, In direct difference to walking and jogging running also produces an after-burn which continues to consume calories for some time after the end of the run.

From a fitness and health point of view we understand that: