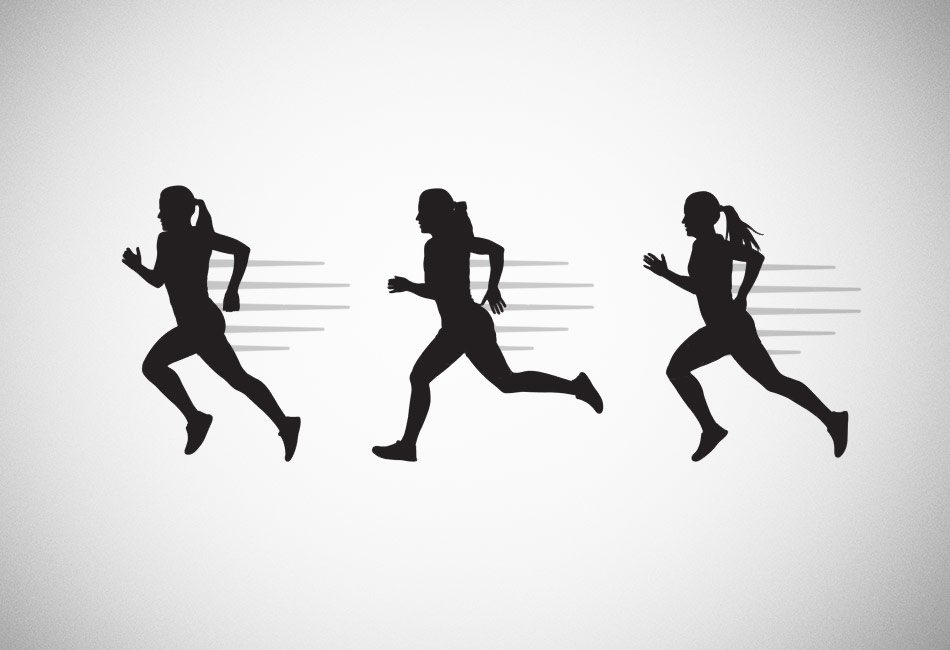 How to Run Faster, Punch Harder

There are some things in fitness that are counterintuitive and because of that they don’t become immediately obvious until they’re explained. The way we use our arms and legs is one of them. Now, usually, we train our arms by doing push-ups or by lifting, and we train our legs through squats and jumps and running and we believe that we need strong arms to push, lift and punch and strong legs to jump, kick and run.

The truth is more complicated than that. To understand this consider how hard it is to run with your hands tied behind your back. Kicking, in this situation, becomes almost impossible. So does jumping. Consider, also, how a pulled hamstring or an Achilles tendon injury prevents boxers from punching. You can’t even push anything heavy with a leg injury like these. You now begin to get an idea of how complicated power transfer is through the human system.

To understand why and how arms help us run and legs help us punch we need to look at how power is transferred through the human body and is then turned into motion. For that we need a little physics. For clarity we shall simplify things as much as possible. So, let’s start with the basic idea that all motion is the result of a reaction. The reaction is equal and opposite to an action. That action is the contact of the human body with the ground.

By pushing against the ground with our legs we initiate an action that leads to an equal and opposite reaction. That reaction is the force that travels through our legs so we can walk, run, dance, kick and jump. The parts of the body involved in the generation of energy at ground level, its transfer through the body and its output to the arms (and vice versa) are called a kinetic chain.[1]

The kinetic chain requires optimal anatomy, physiology, and mechanics and the execution of a punch, a throw, a jump or a kick requires the synchronization of several different phases. Each of these phases is governed by a specific physical and mental state. When the kinetic chain is not optimized the body finds itself struggling to maintain momentum and balance. That struggle creates inefficiencies of movement that make the muscles work harder. They also increase the amount of energy being consumed for relatively simple tasks which means they accelerate fatigue which is why it is difficult to run with our hands tied behind our back.

The truth is that we punch with our legs. What we do when we throw a punch is use our legs to push off the ground and twist our torso to transfer as much of the energy generated from that push, to our arms and fists.[2]

A 2014 study published in the Annals of Sports Science used Olympic-standard boxers to prove that “… legs have a strong effect on impact force, through transferring momentum into the kinetic chain system based on conservation of angular momentum.”[3]

Golfers, of course, have always known that achieving club-head velocity to drive their shots requires a shift of bodyweight behind their long-distance strokes. And “effective leg drive” is a requirement for tennis players serving deep, powerful serves.[4] Even more interestingly, a study published in the British Journal of Sports Medicine[5] showed that tennis players who shorten their technique and don’t allow their leg strength to fully transmit into their movements experience a much heavier mechanical load on their shoulders and elbows than their counterparts who use the kinetic chain more fully.

While using our legs to push off the ground in order to generate power now begins to make sense and we can all see how important strong legs are in sports that range from boxing to golf, it is harder to intuitively understand that value of strong arms in activities such as running and jumping.

Physics, again, comes to the rescue. To understand the role arms play in activities such as running and jumping we need to consider the body as a system through which travels energy. Energy is generated from the contact of the feet with the ground and, in turn, it generates motion and motion has momentum. The classic physics equation that explains all this says that mass x velocity = momentum. Momentum is defined as the ‘quantity” of motion an object has. A one kilogram ball rolling slowly on the ground, for instance, contains a lot less motion, or momentum than the same ball travelling through the air because it has just been kicked.

So, the moment we want to run and our feet hit the ground we have momentum which means we are off and moving. This is where things get interesting. Momentum in a long kinetic chain, like the human body requires a means of correction. The reason for this lies in the placement of our legs on the outside edges of our body. Obviously we need this in order to balance properly when we stand and in order to have the capacity for maximum mobility towards the sides as well as the front and, with some repositioning, the back.

What this placement does however is that when our foot hits the ground with force it generates motion that doesn’t just push the body forward it also pushes it a little to the side. So the right leg, for instance, will push the body forward and to the left and left forward and to the right. As a kinetic chain the body works to counteract the lateral tendency to the motion each time by tensing and relaxing specific muscle groups. This activity then increases the energy consumption on an activity that is already physiologically costly and it reduces the energy available to build and maintain the forward momentum.[6]

To test the theory that our arms increase efficiency and reduce energy consumption when we run researchers from the University of Colorado at Boulder, USA, gathered 13 experienced runners and had them undergo a variety of tests that tracked their body positioning and oxygen consumption when they ran with their arms as normal, held behind their back, folded across their chest and held behind their head.

With each variation the researchers discovered that energy consumption and the overall metabolic load experienced by the runner rose significantly.[7] More specifically, the data showed that runners required 3 per cent more energy when holding their arms behind their back, used 9 percent more when they had their arms folded across their chest and required 13 percent more energy when they were running with their arms behind their head.

The change in arm positions and the corresponding increase in energy consumption also tally with the increase in momentum that happens due to the reapportioning of mass in the body. With our arms behind our back we have greater mobility which means we can still adjust after each step, although from an energy point of view it is costly. There is more and more arm mobility lost with each change in arm position. Put simply, you cannot run fast with your legs if your arms aren't free to move equally fast to counterbalance the motion of the body and maintain the forward momentum.

The role that arms play in the acceleration of leg speed is highlighted by a 2018 study of Tae Kwon Do martial artists. In a comparison between para-athletes who suffer from the loss or partial loss of an arm and fully able-bodied martial artists[8] the researchers discovered that the para-athletes have to learn to use their remaining arm differently in order to compensate and produce as powerful a roundhouse (or turning kick) as possible.

Power travels through the body from the bottom up. Running, jumping and kicking efficiency is generated from the top down. Strong legs will always generate more power but strong arms are required to create efficiency so we can move faster, longer without tiring too much. Physical power expressed as the ability to perform a particular activity like running, jumping, punching or kicking with great physical force requires the efficiency of motion that the body achieves through its kinetic chain when the arms, legs and torso are perfectly synchronized and coordinated with each other.

Current funding status: low
What does this mean?
DAREBEE is a non-profit free, ad-free and product placement free global fitness resource. DAREBEE is supported exclusively via user donations.
Disclaimer & Privacy Policy. © 2021 DAREBEE | formerly NeilaRey.com  | All Rights Reserved. This website uses Cookies.
All of the materials on this website are unique, copyrighted and are exclusive to darebee.com. Contact DAREBEE administration