How To Build Quality Muscle

In a perfect world all muscle would be equal. If we needed to increase strength then we would simply need to put on muscle. Unfortunately the world is not perfect and all muscle fibers are not equal. This means that when it comes to functional strength size of muscle really does not matter and quality is all important.

This is an area that is still being researched despite a century of experimentation so it’s worth diving deep in order to understand the mechanics of the muscles of the body a little better. Muscle accounts for up to 50% of our body’s total weight. Of that, some is cardiac muscle which is highly specialized and some is smooth muscle such as that found in our guts. The rest is skeletal muscle which is the muscle we try to control voluntarily, through physical training.

How Do Muscles Work?

Although we frequently treat the body like a machine (we call it an “adaptive machine” for example) and suggest that it is a biomechanical construct through which act physical forces, the truth is that we are way more complex than that. Beyond the biomechanics that make our muscles act like levers that can exert force upon objects, there is a biochemical aspect to us and a neurological one.

An untrained person who is asked to throw a punch, for example, will generate only a fraction of the force of a trained person even if they have more muscle. The reason for that is neurological. A person who has trained themselves to perform a physical action like throwing a punch, has specific neural pathways in the brain that allow the body to recruit more muscle fibers than an untrained person and coordinate them all together to produce maximum force. The person who isn’t trained hasn’t got those neurological pathways in their brain and cannot, as a result, recruit sufficient muscle fibers nor can they adequately coordinate the ones they do recruit. They end up, then, using a lot of energy but producing very little effective output. Simply put, their muscles are inefficient.

The same principle applies to doing a push up, performing a chin up or lifting a heavy weight, which is why those who are used to doing these seem to be able to perform them so easily. To compare like-for-like we will use the simple push up as a guide, throughout the article, as we look at what happens to muscles as they work.

Now, when we do perform a push up several different mechanisms kick in. The first of these is the biochemical one and it’s called the adenosine triphosphate–creatine phosphate (ATP-CP) system. It uses fuel stored directly in the muscles to respond fast and furiously to the need to activate the muscles.

The moment that fuel is exhausted the glycolytic or Krebs cycle kicks in. The Krebs Cycle is the central metabolic pathway in all aerobic organisms. The cycle is “a series of eight reactions that occur in the mitochondrion. These reactions take a two carbon molecule (acetate) and completely oxidize it to carbon dioxide.” The Krebs Cycle is responsible for the breakdown of blood sugar or carbohydrates, through the process of glycolysis, to produce adenosine triphosphate or ATP. The Krebs Cycle is aerobic (i.e. it uses up oxygen).

The moment the blood sugar levels are insufficient for the Krebs cycle to continue the oxidative (or fully aerobic) system kicks in and fat reserves stored in the body are catalyzed. These three energy systems overlap and even support each other with the oxidative system helping the ATP-CP cycle recover and replenish itself while still training which is why, say in the middle of a 10km run, with leg muscles feeling like they have no energy left, we can still break into a sprint if necessary, even if at the beginning of the run we exhausted all the fuel stored in our muscles.

While all this is going on biochemically the mechanical side of muscle movement is no less fascinating. In order for muscles to move and us to perform a single push up the command needs to be given by the brain to recruit the muscle fibers necessary to do it.

We shall get back to the exact mechanism of muscle contraction but it’s worth mentioning here that a push-up requires more than strong triceps and powerful deltoids. It really needs a good core (to keep the body straight), strong abs (that activate as we bring ourselves back up), good upper back and neck muscles (to keep the head straight), strong pecs that help support the upper body musculature, strong glutes and quads (for that straight plank effect). All of these, working together make a push up seem fluid, easy and powerful. Very precisely controlled. But recruiting all these muscle groups requires changes in the neurological part of us – the neural pathways in our brain that recognize the movement and already have clearly defined channels to make it happen without much working out on the best way to do it.

Strength then is not just physical. A critical component of it is mental which is why functional strength (the ability of muscles to coordinate and work well together) does not rely on muscle size. Studies that show that powerlifters, for example, are stronger than bodybuilders who are clearly bigger in the muscles they have also show that powerlifters recruit more muscle groups than bodybuilders, in different order.

Finally, while all this is happening the real work in the muscles is done by Acetylcholine which is released when the motor unit fires its command to perform the push up of our example. Acetylcholine is a neurotransmitter which creates a twitch in the muscle fibers. When enough twitches happen together they cause a full contraction and generate a movement in a muscle group.

At this point we can break things down even further and see that each muscle fiber contains cells called myofibrils which do all the heavy lifting. Each myofibril is made up of sarcomeres separated by Z-lines. The Z-lines get closer and closer together as the myofibril contracts. The reason the myofibril contracts is because protein chains made up of microscopic actin and myosin protein filaments slide across each other.

Basically the push up we performed only became possible because of the action of actin and myosin chains but that action would have been impossible without other proteins (troponin and tropomyosin), ions (sodium, calcium and potassium), energy carriers (ATP), and blood circulation to deliver oxygen and remove carbon dioxide.

In theory, knowing how muscles work allows us to begin to better understand what we should do to build muscles up. We say in theory because while there is a lot of anecdotal evidence on muscle training and muscle quality the process itself is still far from clear.

When we train our muscles we want to achieve a combination of three things: strength, speed and endurance. Having stronger, faster muscles that get tired less easily makes us more athletic and enables us to perform everything physical with greater ease.

This is the point where things get really interesting however. While we know what to do to get bigger muscles we do not always end up with faster and stronger ones. That’s because when it comes to growing muscles an increase in muscle size, called hypertrophy, does not always equate to a corresponding increase in muscle strength, speed or stamina.

Strength, in particular, is perhaps the most deceptive. As we have seen neural adaptations, the brain’s ability to recruit and then coordinate more muscle groups in a more efficient way, plays a large role in developing what we call functional strength. Gymnasts, ballet dancers, martial artists and boxers can generate more effective force in what they do than, say a body builder who has visibly larger, more defined muscles.

In order to make a more effective analogy however, studies on the quality of muscle that can be built have focused on comparing body building with its cousin: powerlifting. Generally body builders seem to have an edge on size but powerlifters can shift more weight. This suggests that the structure of muscle fibers is not always the same and that depending on the kind of training you do you can get an increase in muscle size without gaining much in strength.

Direct evidence of this comes from the Bodybuilding annals themselves. In 1993, Tom Platz, who reputedly had the biggest legs in bodybuilding history, entered into a squatting competition with Fred Hatfield, who was the first guy to squat 1,000 pounds.

Although Tom Platz's legs were much bigger than Fred Hatfield's, Fred squatted 855 pounds to Tom's 765 pounds. But when they took some weight off the bar and decreased the load to 525 pounds for a test of lower-body endurance, Tom beat Fred, performing 23 reps compared to Fred's 11.

A more scientific study published by the National Strength & Conditioning Association backed this up by showing that already fit people who trained with low loads and lots of reps (like bodybuilders do) were able to increase endurance and muscle size but those who trained with high loads and few reps became stronger without having an increase in muscle circumference.

If we used push-ups as an example of how to train, ten slow reps done often in the day would lead to an increase in muscle size and would improve the ability to do slow push up reps frequently without tiring (endurance). However fifty push-ups done in one go, as fast as it is humanly possible (resulting in high muscle load) would lead to an increase in strength without necessarily increasing the size of the muscles involved.

While no one wants low quality muscle, the idea of what is quality muscle is subjective and depends on what the particular sport is. Bodybuilders, for example, want their muscles to be as big as possible and quality muscle, for them equals size. Powerlifters and sprinters on the other hand want muscles that will generate great force in the shortest possible time and for them quality muscle is muscle that is heavy and strong instead of big.

Before we get to the critical question of how do we build muscle that’s really strong it’s worth asking how can muscle be big without being also very strong? This is where muscle architecture comes in. Depending on the kind of training there are three ways to generate muscle size without improving strength:

Muscle that is built for strength requires:

After a certain point muscle size and muscle strength become incompatible with each other. You need then to train for one or the other but training for both to the same extent becomes nearly impossible.

Bodybuilders and powerlifters, marathon runners and sprinters are perfect examples of the body’s adaptive capabilities. Each is a perfect specimen of the requirements of their sport. Pitting one against the other in order to determine whose ‘best’ is counterproductive. It’s like comparing a forklift truck to a Formula One car. They are both four wheeled vehicles but each has been made to do something very specific.

Most of us require functional strength and this has a strong neural component and better muscle coordination, before we begin to look at muscle size. If we also require size we must incorporate a low-load, high rep training day here and there in our regime. 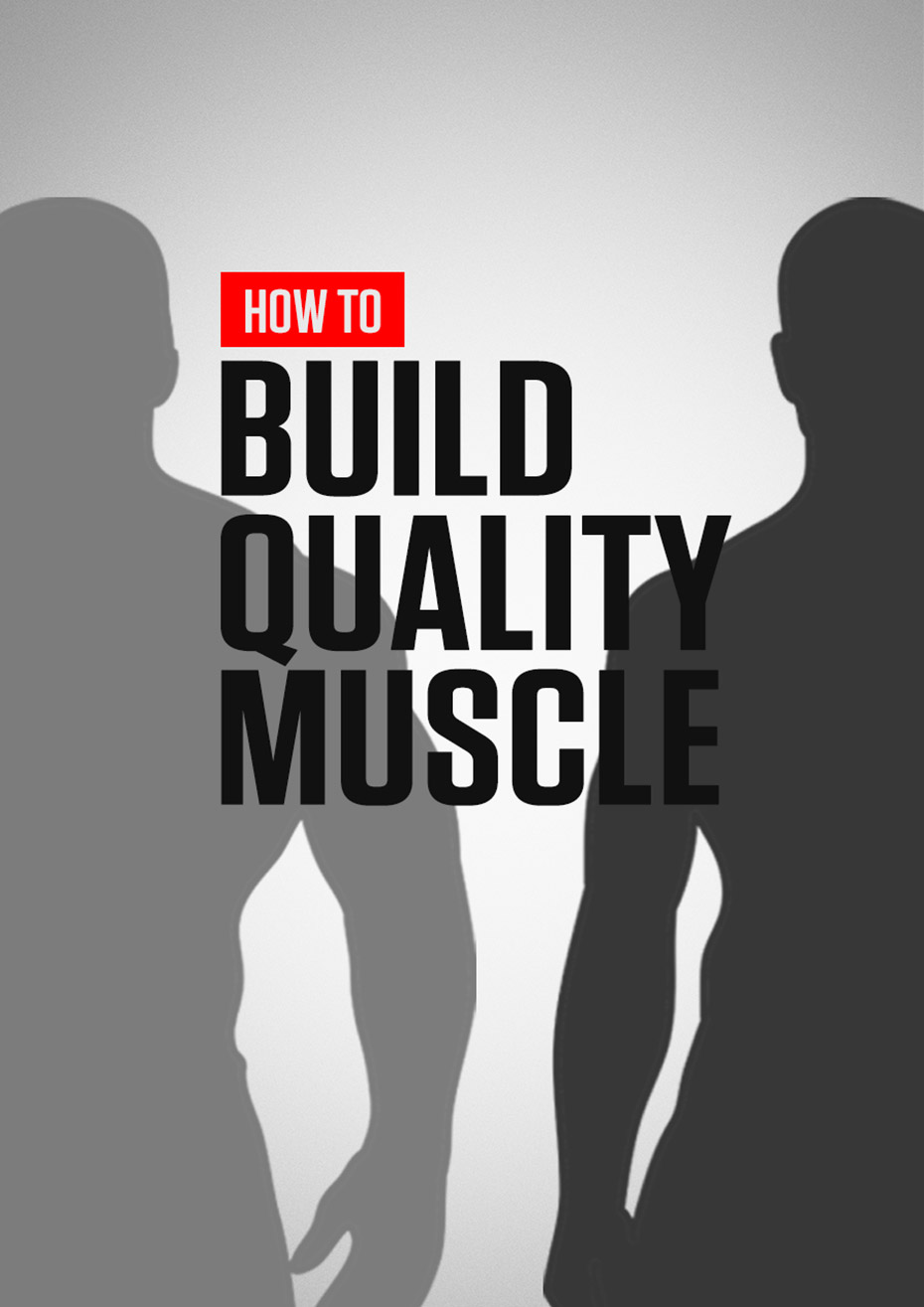