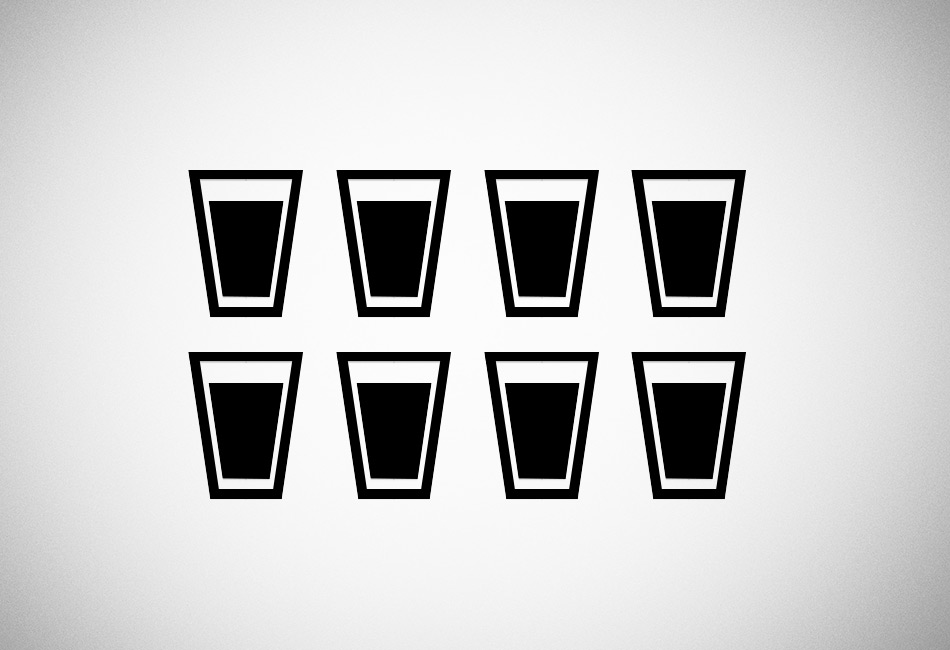 Nearly 80% of our body is made up of water at birth. When something in our biological make up takes up so much volume the chances are it plays a critical role in our neurobiology which also means it affects every aspect of our fitness.

By the time we reach maturity water levels have stabilized to 65% for adult males and 55% for adult females which suggests that water continues to be critical throughout our lives, so the question is how much should we drink in order to be fit and healthy?

Depending on where you look and who you ask the answers are going to be either up to eight glasses a day or less than eight glasses a day. Those who say we don’t drink enough also cite evidence that water helps our metabolism stay active, boosts our brain power and helps athletic performance while the critics claim that too much water makes us stupid, it can seriously depletes sodium levels in our bloodstream impairing athletic performance and can, in extreme cases, also kill us.

Both camps cite studies, so which is right?

Clearly when there is so much controversy and so many people throwing their weight behind each answer the picture is neither clear nor unbiased which means we’ll need to take this one from the very beginning and build it up. So let’s start from absolute basics.

What does water do?

Water is needed to do four major things in the body:

According to H.H. Mitchell writing in the Journal of Biological Chemistry 158, the brain and heart are composed of 73% water, and the lungs are about 83% water. The skin contains 64% water, muscles and kidneys are 79%, and even the bones are watery: 31%.

These percentages alone should be enough to convince you that hydration is important to maintaining the function of breathing, let alone everything else. But let’s go and see what the research says about it all.

The Eight Glasses of Water Per Day ‘Myth’

Like most widely quoted pieces of advice the popularity of the “drink eight 8oz glasses a day” one, frequently shortened to the 8 X 8 ‘rule’ has more to do with its memorability than its foundation in scientific research. The origin of it is, most likely, a 1945 publication by the National Food and Nutrition Board, a US government advisory agency, that stated that: “A suitable allowance of water for adults is 2.5 liters daily in most instances. … Most of this quantity is contained in prepared foods.” Seeing how eight 8oz glasses a day will give you that it seems reasonable to suppose that the advice was born without taking into account what we get from food and has ever since been perpetuated, uncritically, though efforts are being made to address this like this study in the American Journal of Physiology - Regulatory, Integrative and Comparative Physiology.

The lack of scientific backing and the glib way of suggesting how much water we should drink has led to a backlash that has its own set of issues. Those arguing against the 8 X 8 ‘rule’ suggest that a “significant amount of water comes from the food we eat” – well, that “significant amount” is just 20% which suggests that it is easier to become dehydrated than go the other way.

One recent scientific study carried out by Scottish GP Margaret McCartney appears to further debunk the need to drink eight glasses of water a day and has further fueled the debate, prompting a response regarding hydration and children.

So, who’s right? Untangling things further, McCartney’s study was prompted by bottled water industry claims that we are all chronically dehydrated and it is better to drink as much bottled water (obviously) as possible and she also appeared to focus on marathon runners whose hydration requirements are both extreme and unique. While we may not really need to drink 2.5 liters of bottled water a day, we certainly do need to drink that amount of fluid in total (that includes food and other drinks we consume) per day and more than that if it’s hot or we are physically active.

A drop of body weight by as little as 2% due to dehydration is enough to affect performance by slowing down the entire process through which the body metabolizes glycogen (fuel) and gets rid of byproducts. It also contributes to muscle fatigue long before the body’s fuel reserves run out.

A California University of Pennsylvania study showed that the body’s “Core temperature raises an additional 0.15 to 0.20 degrees Celsius for every 1 percent of body weight lost due to sweating during activity. This thermal strain also influences a greater cardiovascular strain. One example of the changes in the cardiovascular system is a rise in heart rate by an additional 3 to 5 beats per minute for every 1 percent of body weight lost.” Which lead to greater fatigue and risk of injury.

Other Benefits of Drinking Enough Water

While debunkers are using extreme athletes and the bottled water industry as reasons not to drink 6 – 8 glasses of water a day, the research on the health benefits of water piles up:

Mobility - Cartilage, the slippery coating at the end of each bone, is comprised of 65 to 80 percent water. Synovial fluid keeps cartilage healthy, slick and smooth, properly cushioning joints if properly hydrated. The University of Maryland Medical Center recommends drinking 6-8 glasses of water per day to possibly stave off osteoarthritis, the most common form of the joint disease known as arthritis.

Weight control - At the 240th National Meeting of the American Chemical Society (ACS) a study found “… that middle aged and older people who drank two cups of water right before eating a meal ate between 75 and 90 fewer calories during that meal.”

Mood -  A Tufts University study showed that college athletes who did not hydrate enough were prone to irritability and bad moods.

Headache prevention – An admittedly small study has shown that particular types of headaches that fall into the migraines or tension headaches categories, can be prevented by increasing water intake.

Bowel health – Even minor dehydration will lead to constipation according to a study published in Nature which then affects the functioning of the bowel and general health.

Having enough water in our bodies is so critical that a study published in the Journal of International Sports Nutrition found that drinking cold water, while exercising helped maintain performance output.

The body’s demand on water during exercise is such that frequently just drinking water may not even be enough in order to hydrate quickly. New findings are suggesting that milk, coconut water and even beer are suitable rehydrating agents.

McCartney’s study which acknowledges that there are beneficial instances to drinking a lot of water, cited the danger of over-hydrating and losing too much sodium and potassium from the body as a potential risk. Potassium plays an important role in electrolyte regulation, nerve function, muscle control, and blood pressure. It is found within all cells of the body, and its levels are controlled by the kidneys, its primary function is to regulate water and mineral balance throughout the body.

McCartney’s study focused on marathon runners whose highly intense thermogenetic activity leaves them little option. They have to hydrate at regular intervals, consuming a lot of water in order to be able to keep up with the demands of their training and their sport, both of which place a massive heatload on the body. They are an outlier. The rest of us are superbly conditioned by nature to not over-hydrate.

If you’re exercising, or live in a hot country (or both) you need to drink plenty of water. Your body will tell you how much is enough and the six to eight glasses a day guideline is a pretty good start.