A Complete Guide To Spinning Kicks

Anyone who’s watched a martial arts film can’t help but get excited the moment the spinning kicks start flying. They are cinematically spectacular, improbably athletic and viscerally exciting. They seem to mix the best of ballet and gymnastics with the hard edge of unarmed combat. They excite us because they seemingly redefine the way the human body moves and allow us to imagine the ability to better control our own body.

The fact is that spinning kicks are subject to the laws of physics. As such, they use centripedal force to accelerate mass (i.e. the kicking leg) times distance traveled to generate power at the moment of impact. They are exactly described by the equation of force = mass times acceleration, and are mathematically expressed as a given mass times distance traveled, divided by the square of a time. We therefore say that [Force] = MLT−2.

To simplify this think of spinning a stone tied to a string over your head. The stone is the mass. The more times you spin it is the distance it travels. Time is the interval between your first spin and its moment of release. 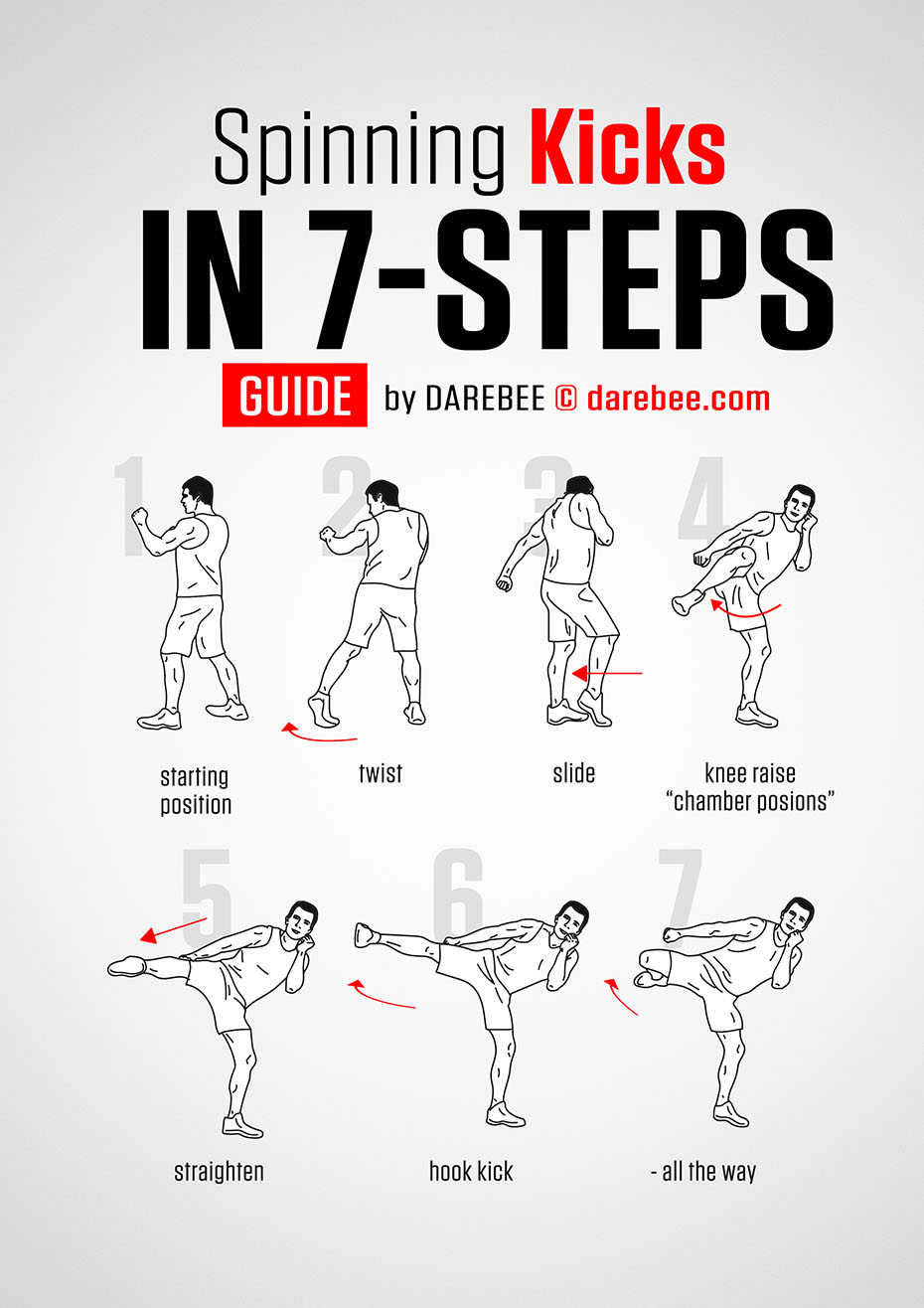 To simplify it even further consider that spinning kicks are used to generate more power than would normally be available given the space we have to kick in. They do however have two significant issues: The first is that by definition a spinning kick requires us to momentarily take our eyes off our target as our body spins in order to bring the kick into alignment with its intended target, again. This increases the potential of our missing plus, during the brief time our head and body spin and we take our eyes off the target, the situation in terms of distance and positioning may well have changed. The second is that spinning kicks travel a greater distance than a straight kick. Given that in a real-world scenario the shortest distance between two objects is always a straight line and fighting is about finding these straight lines and taking advantage of them, spinning kicks seem to complicate matters a lot, require a lot of energy to pull off and can be very imprecise.

The answer to the first problem is solved with flexibility and timing. Using a spinning kick when you are not very flexible is going to be slow as you are battling the inflexibility of your own muscles and tendons. Get your timing wrong and you will also most probably miss as your target moves either towards you or away from you.

The solution to the second problem is through technique. Excellent technique positions the body for more accuracy, less effort and greater speed. So, while you could, perhaps wing a martial arts kick that travels along a straight line as a beginner. A spinning kick to someone who is new to them, will always feel slow and awkward and most likely throw you off balance.

Luckily for you we have broken the process down into actionable chunks to best show you how to execute the perfect spinning kick. The first tip is that your focus should always be on technique. Kicking high and kicking fast requires flexibility. Flexibility takes patience and time to develop. But flexibility without a good technique on spinning kicks will not help you. 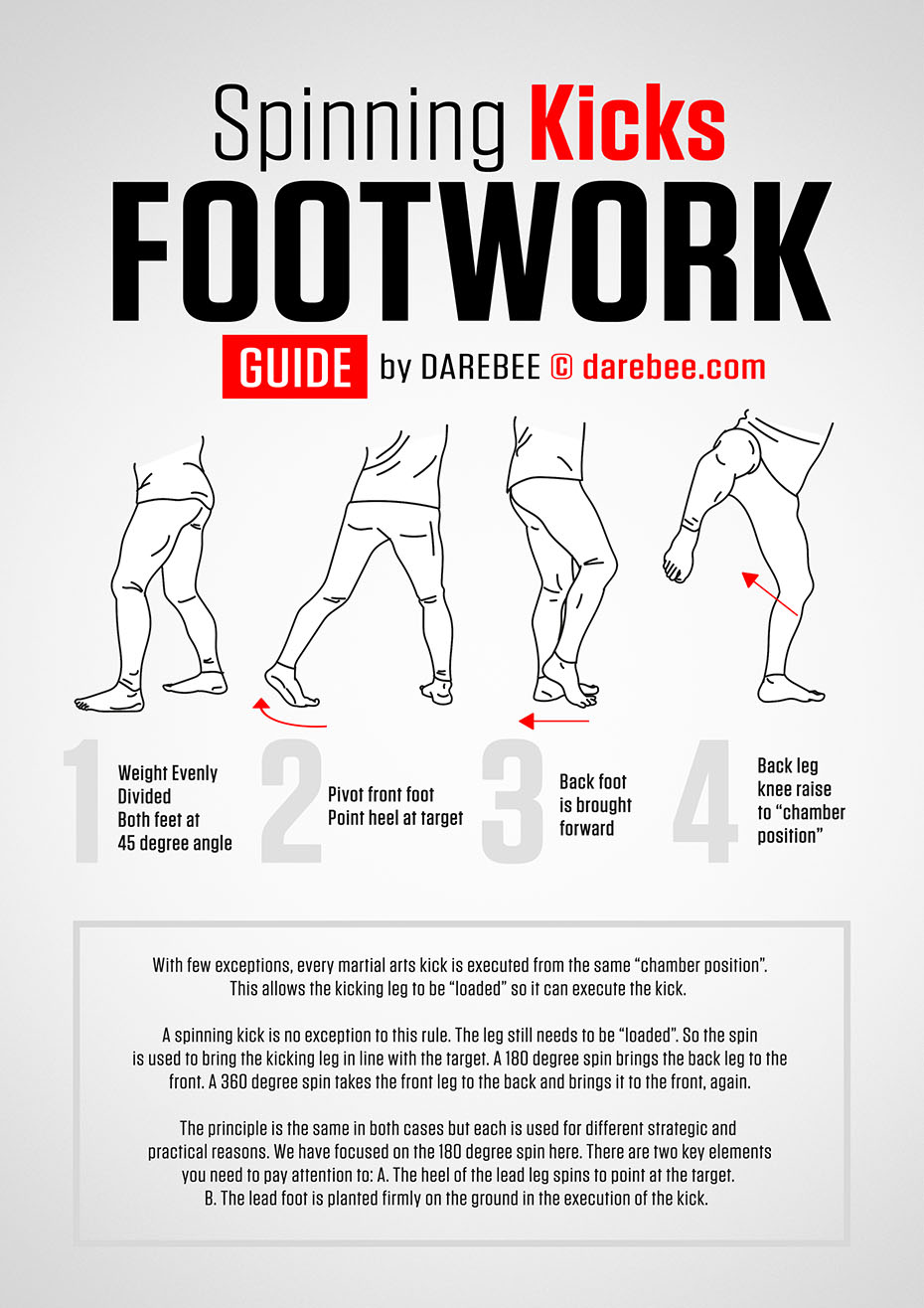 Here we break down all the components of a spinning kick (and they are the same regardless of what type of martial art you are doing).

If you are doing this for sport, fitness and fun you can go for either type of kicking leg positioning. Both a bent leg as in the reverse hook kick and a straight leg as in the reverse turning kick deliver a lot of power. But they are not equal. Competition fighters know that a reverse hook kick will be faster to execute than a reverse turning kick and will require less energy and effort to do so. The reason for this lies, again, in physics. The principle of the conservation of angular momentum that requires you tuck your arms in your body in order to spin faster, also applies to your legs. In executing a fast spin kick like a reverse hook kick your kicking leg is close to your body throughout until the moment comes to place it in the chamber position and by then it is in line with the target and ready to execute the kick.

A reverse turning kick however maintains a straight, rigid kicking leg throughout which means your kicking leg is trailing outside the body’s perimeter requiring greater energy and effort to spin it round and have it hit the target. At the same time it delivers a more powerful blow than a reverse hook kick. This is one reason why breaking techniques that use spinning kicks tend to go with reverse turning kick as opposed to reverse hook kick.

Strike With The Heel Or The Ball Of The Foot?

The point you strike with when you use a spinning kick is more clearly articulated by asking do you strike with an edge or a flat surface? And the answer to that is defined by your goal and the target. If you are using a reverse hook kick or a reverse turning kick as your choice of spinning kick then you use either the ball of the foot or the heel (i.e. edge) and that will depend upon how hard you want to strike the target and what kind of target it is.

Hard targets, like the ones used in exhibitions of breaking techniques, will always require the heel. Competition sparring in traditional martial arts uses a point system and you can use the ball of the foot to protect your opponent from harm.

The same applies to how you choose to strike with a spinning side kick or a back kick. Using the flat of the foot to make contact spreads the force applied at the point of impact and lessens the potential for damage. Striking with the edge of the foot or the heel, in the case of the back kick, maximizes the force being applied.

When Do You Use Spinning Kicks?

Cinema lovers who watch martial arts films would say that you use spinning kicks all the time, everywhere. Because they look that good. The real answer however is, again, dictated by pesky physics. Spinning kicks take a lot of energy to execute which means they are really tiring. Even in MMA competitions they are used sparingly for that reason.

In addition they are problematic in terms of the time it takes to recover full mobility and balance after executing one. Add the fact that in combat sports that have highly fluid situations by their very nature you are required to take your eyes off your opponent even if it’s just for an instant or two and you can see the need to be selective.

So, when would you use them? Obviously, in exhibitions. In sparring where you do not go full force and neither does your opponent. In training. Particularly in training because they bring in so many different components of fitness together in one instance. Spinning kicks are a brilliant way to accelerate your fitness level.

Spinning kicks are spectacular to see and make you feel amazing when you execute them. They require however good technique, speed, great balance and flexibility. All of these need work but technique is paramount. Everything else can be gradually improved but if the technique is not perfect then the kick itself will not work regardless of how fast or flexible you are and how good a balance you may have.

Get your technique right from the start however and you will find that everything else is simply a small obstacle that can be overcome with just a little hard work. Not only will you then totally own your body and its capabilities but you will also feel like you do.